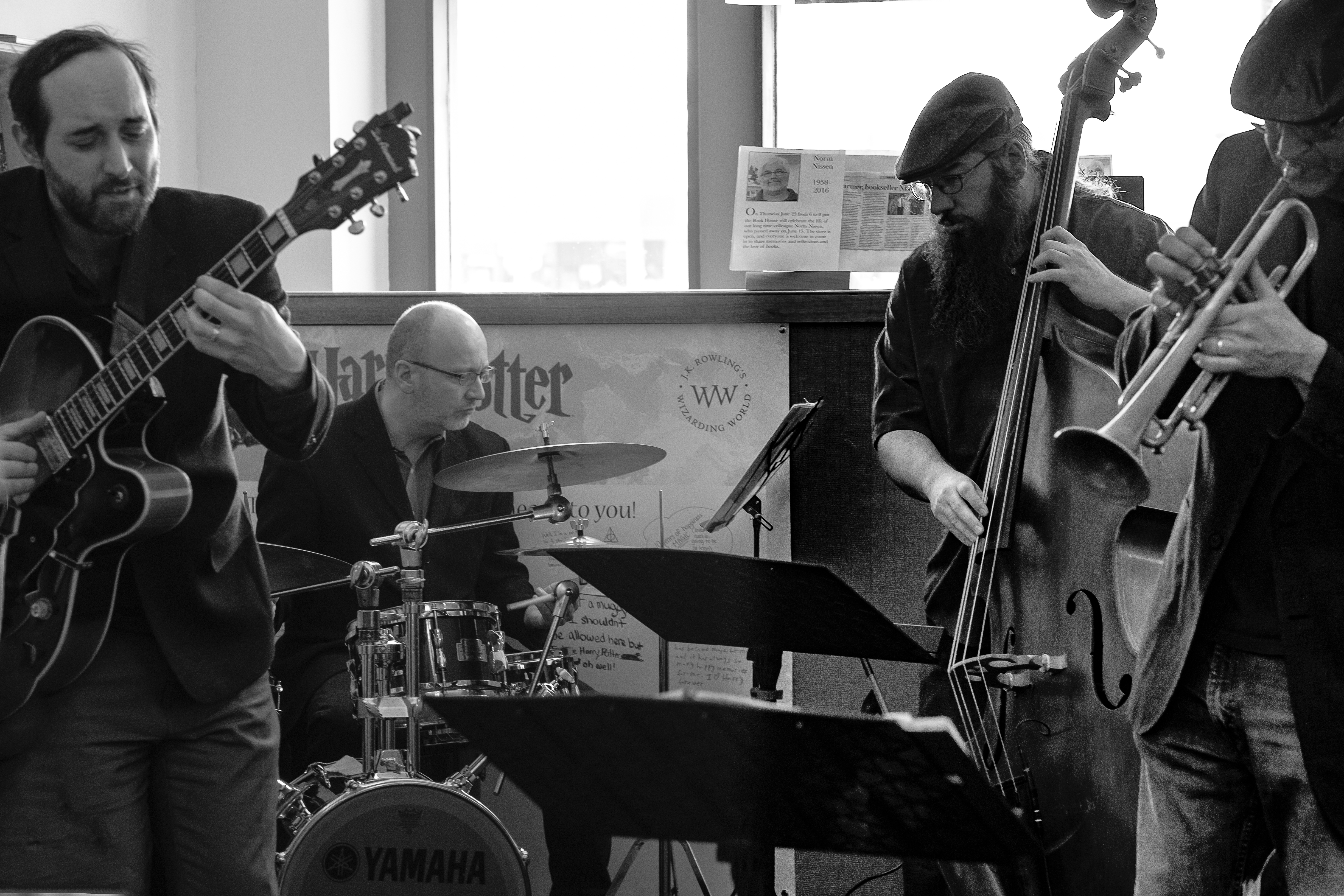 The Arch Stanton Quartet, based in upstate New York, is putting a new spin on bop and post-bop jazz, with funk and Latin grooves, expansive improvisation, and inventive original tunes.

Their debut album, Along For The Ride, was released in November 2012 on WEPA Records. It includes original compositions by trumpet player Terry Gordon and guitarist Roger Noyes. Nick Mondello summed it best in his review on CD Baby:

“Recorded live, this pianoless group offers up a magnificent seven originals and one classic cover. A highly eclectic CD, the material ranges from straight-ahead harder bop (‘Along for the Ride’) to more cerebral Monk-flavored rock-tinged fare (‘Modest Sleuthing’). ‘Della Royale’ struts a Cajun-flavor and ‘Flying Gurnard’ exhibits freer expressive tonalities on which the group shines brilliantly. ‘Compared to What’ (not the Les McCann-Eddie Harris classic) pounds a heavy beat and ‘Estate’ (‘Summer’) is a beautiful rendition that sends it all home.”

In March 2013 the band was named Best Local Jazz Band in the Metroland Readers Poll and embarked on a tour of Egypt, performing at the Cairo Jazz Festival and other gigs. The trip was sponsored by the educational organization AMIDEAST, the U.S. Embassy Cairo, and the Center for American Studies at the American University in Cairo. That same year, the band opened up for Charlie Hunter and Oleta Adams at the Albany Riverfront Jazz Festival.

Drawing from their experiences in Egypt, the group, in October 2014, released a 9-song sophomore album, Blues For Soli (also on WEPA Records), which includes a suite of music directly influenced by their Egypt tour. In a review of the album for Metroland, Jeff Nania writes: “This record serves to showcase the evolution of a local group’s compositional style as they continue to go beyond bop and incorporate further cultural influences into their sound.”

Blues For Soli secured spots on the year-end ‘best-of lists’ for albanyjazz.com and WEXT 97.7 FM. In naming it as his number 4 selection for the year, photographer/reviewer Rudy Lu called Blues For Soli “A clear example of how jazz is absorbing other music.”

Gigging throughout the Northeastern New York area, the band has performed at such venues as 74 State, Justin’s Jazz Club, 9 Maple Avenue, More Bread and Jam, The Otesaga Resort Hotel, Midtown Tap and Tea Room, the Linda Norris Auditorium, the Oasis, Cooper’s Cave Ale Company, and others. In 2016, the band had the distinct honor of opening up the second night of the Bridge Jazz Festival at the Massry Center in Albany, sharing the stage with the No BS! Brass Band and Ellis and Delfeayo Marsalis of the famed Marsalis family, the “first family” of New Orleans Jazz.